We have compiled a list of safest VPN Apps for Android in 2019. We have found these VPN Apps the safest when it comes to concealing your identity. There are thousands and thousands of VPN apps available on the internet but not all of them do what they claim. The apps which we have listed here in this post take your security very seriously and make sure that all your internet traffic gets encrypted and secure your identity from any outside potential threat.

The Internet is an ocean of information and anybody can get benefit from it. However, sometimes governments decide to crash the party and tries to block your access to the information on the internet. In such situations, VPN Services becomes very handy. With a good VPN Service, you can get access to all the blocked content in the most secure manner.

Benefits of Using a VPN on Android

Enough chatter now, let’s dive in the list of Safest VPN Apps for Android in 2019.

Note: Tap on the heading to Download the VPN of your choice. 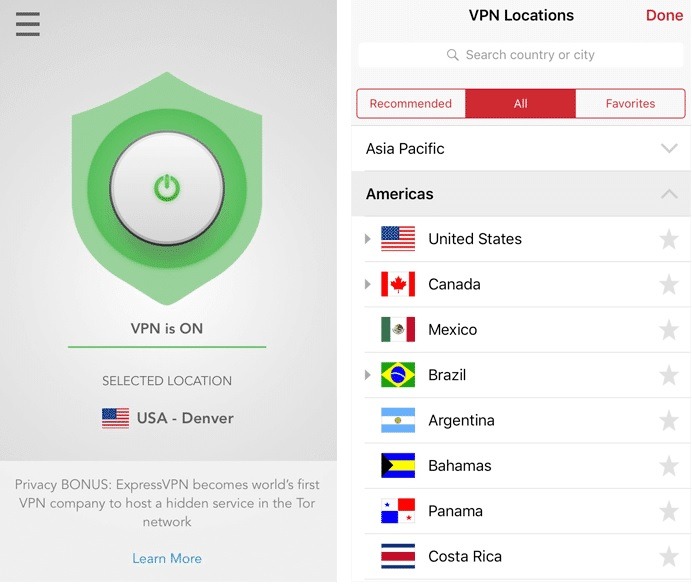 Let’s start with one of the best and advanced VPN services out there. ExpressVPN brings you a long list of features which other VPN Services lack. It’s one of the most user-friendly VPN services available in the market and it follows a no-log policy which means concealing user identity is their topmost priority. Use of peer-to-peer networks and solid 24/7 customer service are other two features which are seldom found on other VPN Apps for Android. This VPN app is best for China since they have very strong stealth servers which ensure that nobody gets to the source. Its network of stealth servers is spread over 90 countries. 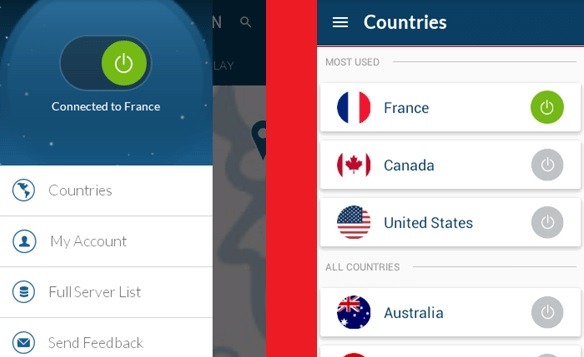 NordVPN is based in Panama and is another safe VPN Service which is very hard to crack. NordVPN’s double-hops ensures maximum security and it also uses vigorous encryption methods. Like ExpressVPN it also follows no-log policy and its servers are scattered across more than 60 countries. One concerning point for this VPN app is that it tends to get slow when the traffic reaches its peak limit. 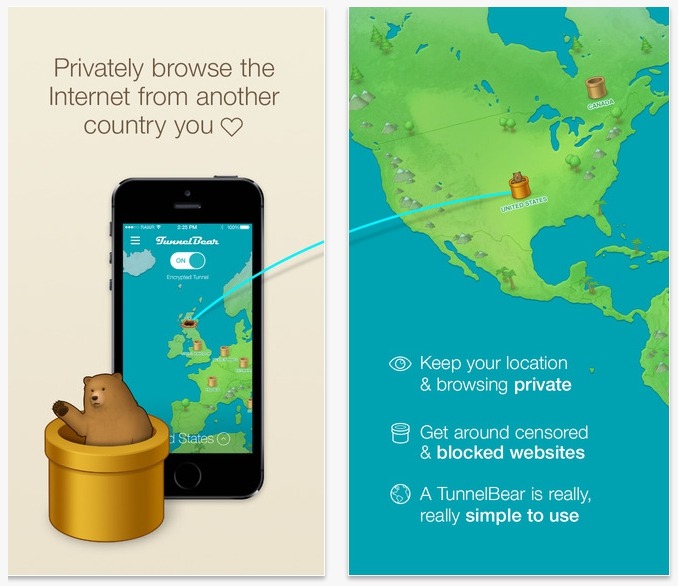 Tunnel Bear is one the most well-known VPN Services, and it also doesn’t log any user activity. By now you must have got an idea that why these are safest VPN apps for Android, most of them don’t log any user activity which means there are very slim chances that your identity gets compromised. Tunnel Bear provides all users with 500MB of browsing data, monthly for absolutely FREE, moreover, if you tweet their product you also get additional 1GB data. It comes with AES-256 bit encryption for all plans even for free ones. 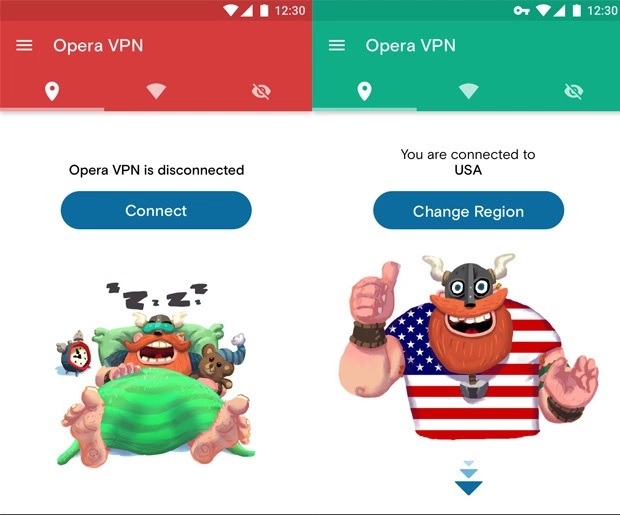 As the name suggests, this VPN App is absolutely free and by free doesn’t mean that it will compromise on its core function. Comes with all the security bells and whistles. The app will shoot some ads at you but at the same time, they have been generous enough to throw-in built-in ad-blocker which is a very handy addition.

IP Vanish is the only VPN Service available at the moment who’s premium plans can be bought via Bitcoin. This feature alone takes the anonymity to the next level. Like any other premium VPN Service IP Vanish also doesn’t record any user activity. Its Network presence is in 60 countries with over 40,000+ shared IP addresses. Tracing a single computer from the pool of 40,000+ shared IP addresses would be like finding a needle in a haystack. 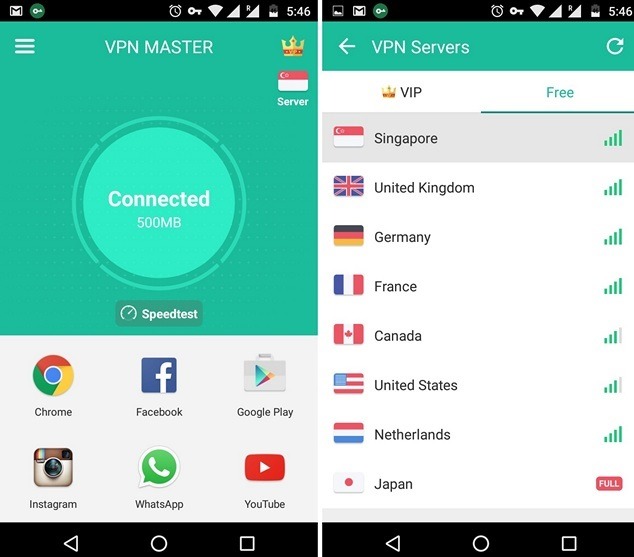 If you are looking for an absolutely free VPN app for Android in 2019 than this is the one for you. VPN Master claims to provide all the premium features at no cost at all. How they earn money? Honestly, I have no idea. But, having said that, it’s also a very well reputed VPN App on Google Play Store. So, we can safely say that they are not in bed with authorities. 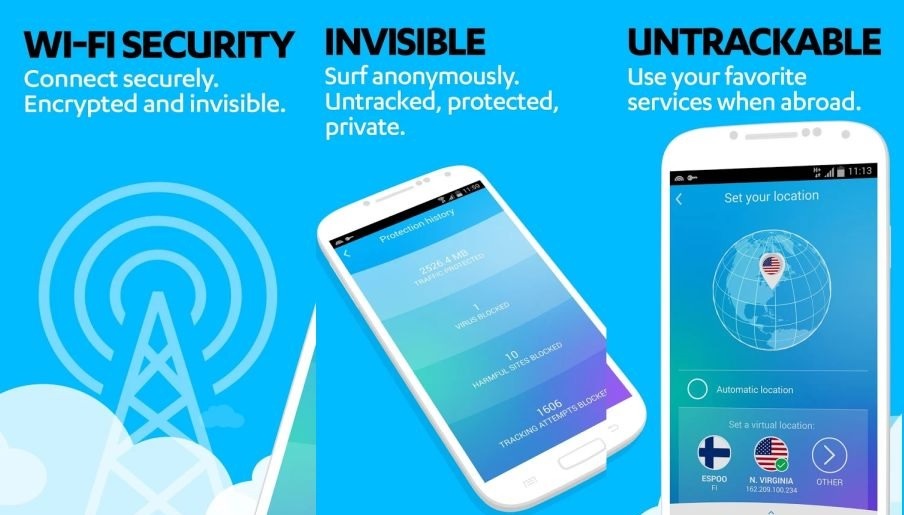 This freedom VPN App for Android has very similar features like Opera VPN, for instance, the ad-blocking feature is also present here. However, it’s not free like Opera VPN you will get 5-day trial period for F-Secure Freedom VPN and after trial period you have to subscribe for a $5.99 monthly FEE. The UI is simple to navigate around and to set it up is also done via a single Tap. 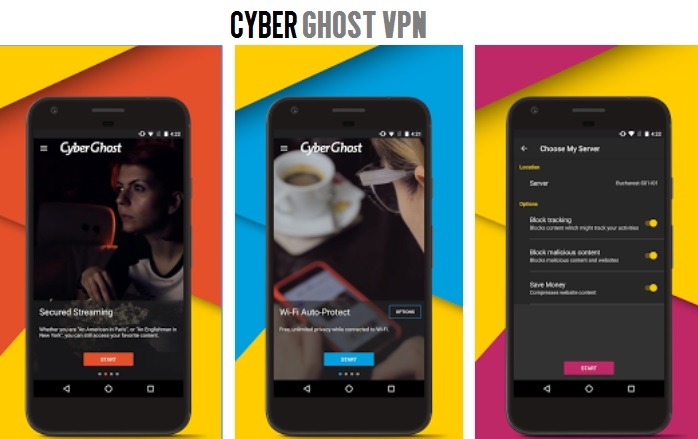 CyberGhost VPN is a very affordable and safe VPN service. If you are on a budget then this app is for you. By cheap it doesn’t mean that they will compromise on the quality, CyberGhost VPN offers military-grade encryption and interesting Kill-Switch feature enabling the service to quickly cut your access to a site if the VPN protection gets compromised for some reason.

This concludes the list of Safest VPN Apps for Android in 2019.

How to Download Yalp Store APK and Install it on Android...

How To Add a Call Record Button To Huawei P10 Plus

October 23, 2017
We use cookies to ensure that we give you the best experience on our website. If you continue to use this site we will assume that you are happy with it.Ok