Stardew Valley is one of those games that will keep you coming back for more and more. After initially releasing on PC in February 2016, the game has been ported to essentially every gaming platform, and has finally made its way to Android devices. If you’re unfamiliar with Stardew Valley, it is a farming simulator where players inherit their Grandpa’s farm and are tasked with turning it into a thriving business. You’ll have to do everything a farmer would do, like maintenance, planting, picking, and a whole lot more.

If you’d like to know more about Stardew Valley, you can head to the Google Play Store where you’ll be able to find loads of information on the mobile game. It is worth noting that the game isn’t free and will cost $8 to download. However, once you have it, have access to everything you need and won’t have to spend countless extra dollars you’ll on micro transactions.

If you already play the game on PC, you might be wondering if you can transfer your data to Stardew Valley on Android. Thankfully, the answer is yes! If you’d like to know more about transferring your saved data from PC to Android, you can find full instructions on the Stardew Valley wiki page. Unfortunately, if you play on consoles or Switch, you won’t be able to transfer over your data and will have to create a new farm.

It seems that Stardew Valley has officially conquered all of the gaming devices. If you can’t get enough of Stardew Valley, unfortunately, you’ll have to be content with what you have. In a Reddit Q&A, the creator announced that he is working on another game in the same universe as Stardew Valley, but it won’t be a sequel or expansion in any way. It should be interesting to get more details on the next project, but for now, you’ll have to stick to your farm. 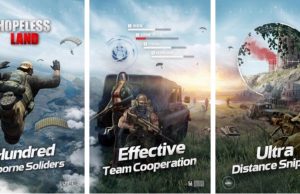 Zunair - February 7, 2018 0
Another battle royale title just landed on Google Play Store and is none other than Hopeless Land: Fight for Survival. Hopeless Land is developed...