Bluestack has just received an update and its version is bumped BlueStacks 4 from 3. A few months ago BlueStacks N was released. It was not a very big upgrade over BlueStacks 3. BlueStacks N was released with Android 7.1.2 Nougat. However, in terms of UI, there were many changes introduced. BlueStacks 4 is a big and actual update over Bluestacks 3 and Bluestacks N. This latest update is much about performance and less about cosmetic changes. You can download BlueStacks 4 from this Android Tutorial. The emulator company claims BlueStacks 4 to be much more simple and powerful than its older versions. They even claim that the emulator is 6x Faster than Samsung Galaxy S9+. Well, that’s a big claim and to see how much water does this claim hold download BlueStacks 4 and check it yourself.

There are a bunch of UI changes but they are not that prominent and doesn’t add much value to the overall user experience. In BlueStacks 3, we used to have an Apps Menu which had System Apps in it like Google Play Store and others. The company has got ridden of it and instead they have added a little toolbar that sticks to the bottom. This toolbar has the Apps Center, Instance Manager, Google Play Store, Help Center, and Rewards Manager.

The company has also introduced BlueStacks points for installing the application via BlueStacks. Which means, now, every time you install a game or an application through BlueStacks 4 you would get reward points for doing so. However, the main attraction of BlueStacks 4 remains its performance side. See the below image to get to know about all the new enhancements made in BlueStacks 4.

All New Enhancements in BlueStacks 4

BlueStacks has been taking care of gaming needs since 2010. The original BlueStacks got released back in 2010 and then after long 5 years, BlueStacks 2 was released. From 2015 till today we have seen three updates, BlueStacks 3, BlueStacks N, and now BlueStacks 4. This consistent update stream shows that the emulator company means business and they are not going anywhere soon. It wasn’t easy to compete against the likes of Andy Android Emulator, Nox Player, MEmu, KO Player and others. But BlueStacks have held its ground pretty solid.

If you meet the above system requirements then go for the ultimate version of BlueStacks. Download BlueStacks 4 by click on the link mentioned below. 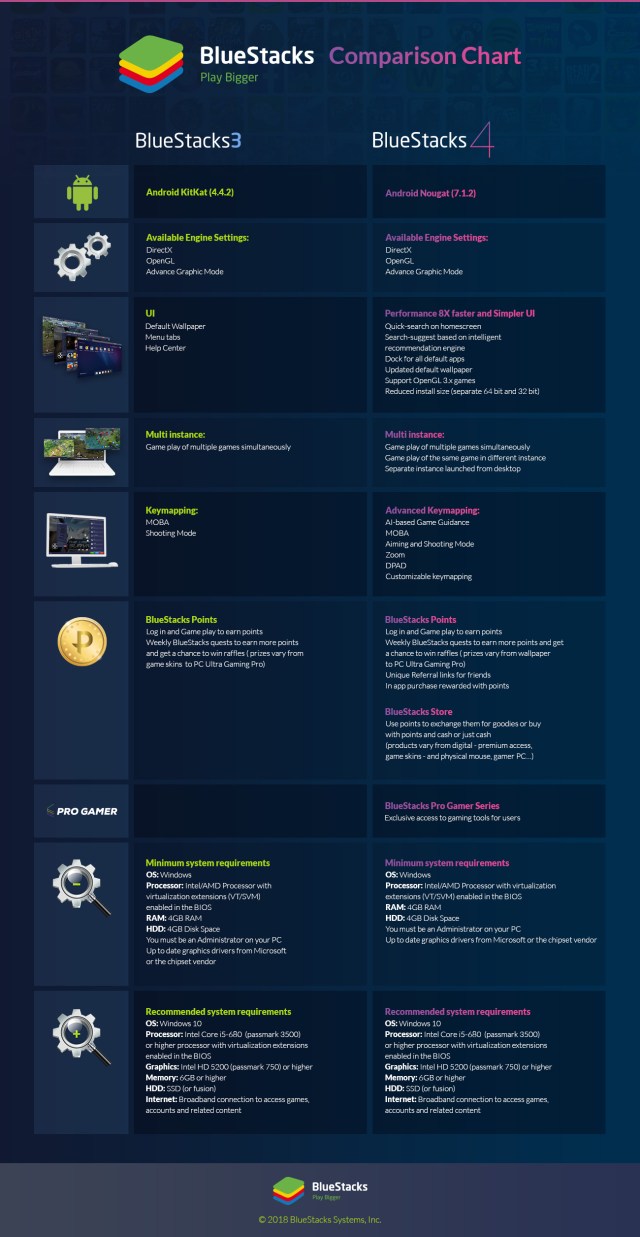