At last, the suspense is over! Google has announced the much-awaited name of Android 8.0. As we reported yesterday, it’s  Android 8.0 Oreo. Google has kept the tradition of naming its OS after the dessert. Android 7.0 Nougat is superseded by Android 8.0 Oreo. It’s been made official at Google I/O event which is just happening in New York at the moment. You can watch Android O Launch event here. Following the tradition, Google has also erected the Android Oreo statue at Google Headquarters in Mountain View, California.

So, now that we know that in Android 8.0 O, “O” stands for Oreo and not Oatmeal or Octopus – Google was never going to name its Android version after a sea animal. Well, Google named Pixel 2 against the sea animals. Anyhow, you must be wondering what Android 8.0 Oreo is going to offer. So, here is everything You need to know about official Android 8.0 Oreo. 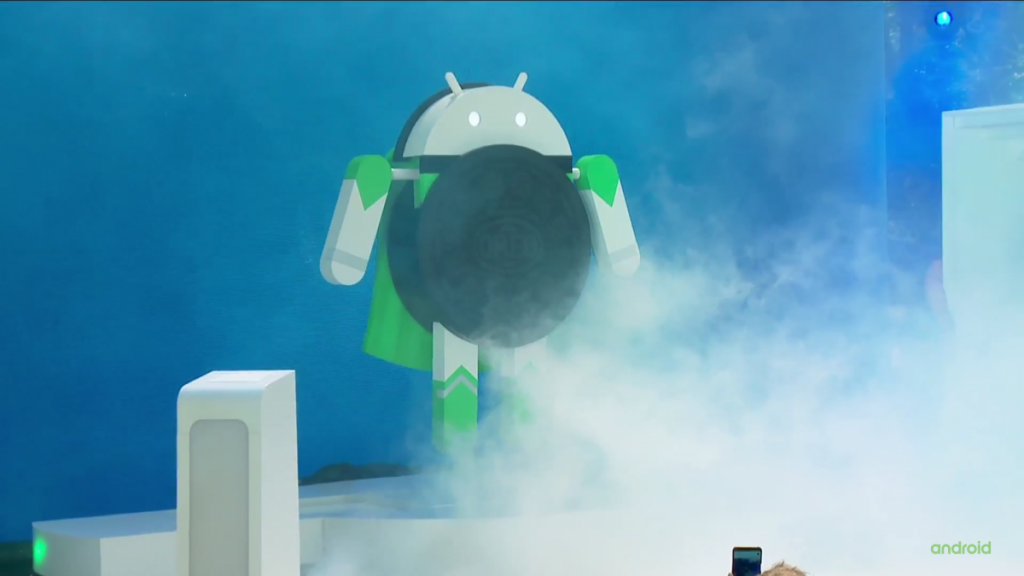 Google brings a lot of improvements and new features over Android Nougat. There many improvements which are backend and won’t be visible to the end user. But these improvements will surely contribute towards a better user experience.

Google bids farewell to the old flat and lifeless emojis. We were seeing those emojis since the emojis existed. However, finally, in Android 8.0 Oreo the Emojis are redesigned which is now rounder than blob emojis. More gradients have put new life into the emojis. You are going to love them.

Background processes have always been a nightmare for battery life. Optimized Battery Life was always a priority for Google in Android 8.0 Oreo. This latest edition of Android puts additional limits on what apps can do in the background in these three key areas: Implicit Broadcasts, background services, and location updates. Google did quite well in Android Nougat to squeeze the maximum life out of battery. But in Android 8.0 Oreo Google has further narrowed down the path for apps that drain the battery in the background.

Now with Android 8.0 Oreo users can select an autofill app like they select a keyboard app. Android 8.0 Oreo finally recognizes the role of password managers by including and Autofill API. Google is adding new APIs to implement an Autofill service as well.

Picture in Picture For Phones, and New Windowing Features

PiP display is now available for phones and tablets. So, now the users can watch a video while answering a  chat or any other task of the same nature.  Other new windowing features include a new app overlay window for apps to make use of, and multi-display support for launching an activity on a remote display.

For the first time, Android 8.0 Oreo brings adaptive launcher icons which can display a variety of shapes on different devices and models. This feature will allow you to display a circular shape on one OEM device, and display a squircle on another device. Each device OEM provides a mask, which the system then uses to render all adaptive icons with the same shape. Adaptive launcher icons are also used in shortcuts, the Settings app, sharing dialogs, and the overview screen.

Support for Wide-gamut Color of Apps

Android Oreo adds support for “wide-gamut color for apps”. Which means developers of imaging apps can now take advantage of new devices that have a wide-gamut color capable display.

Android 8.0 Oreo has introduced a new Wi-FI features called “Wi-Fi Aware”. This feature is also known as Neighborhood Aware Networking (NAN). What it actually does is that it allows you to discover nearby devices and communicate with each other over Wi-Fi without an Internet Access Point. Provided you have appropriate hardware and apps that support this feature.

Android Oreo has also introduced some high-quality Blue-tooth audio codecs such as the LDAC codec by Sony and aptX which is a high-quality blue-tooth codec from Qualcomm.

Here is the list of devices which will get Android 8.0 Oreo update. Check if your device made the list